Before I get into the upcoming plans, here are the changes you can find in the newest version of Liment.

Changes Made for the New Version.

I've added a save system to the game which means that all of the settings you change will be saved and will stay the same after relaunching the game. There is also a new settings category called "Performance". Here you can reduce the amount of background spikes and effects drawn to the screen which will improve performance if the game is struggling on your device. It doesn't make it look pretty but the option is there for you if you need it.

I've also added basic support for monitors with a 4:3 aspect ratio. I'm not too sure how it looks as I have a 16:9 monitor and some things may be drawn incorrectly. If you have any problems please write a comment below so I can address the issue in the next version.

Biomes are now introduced by text in the bottom right of the screen, akin to Breath of the Wild. The start screen used to flip through all the biomes but now it will only show biomes you've discovered. I want to make biomes feel special and interesting when you first discover them and this plays into the future plans for Liment.

I've also added experimental gameplay features which may or may not be removed from the final version of the game, read on for further details and instructions on how to use them.

Recently, I've become more involved with this project as I've forced myself to make new versions for every Sunday, and it makes me more productive as well as makes me feel happier. It's so cool seeing that people are playing my game and reading these devlogs. But I've come to realise that the base game can be pretty boring, and I plan to address the difficulty. After talking about scope in my first devlog, I was scared to dream up anything major but I do want to create a goal for the player besides "Get the Highest Score", so I plan to add an adventure mode. Enough beating around the bush, here is my plan. 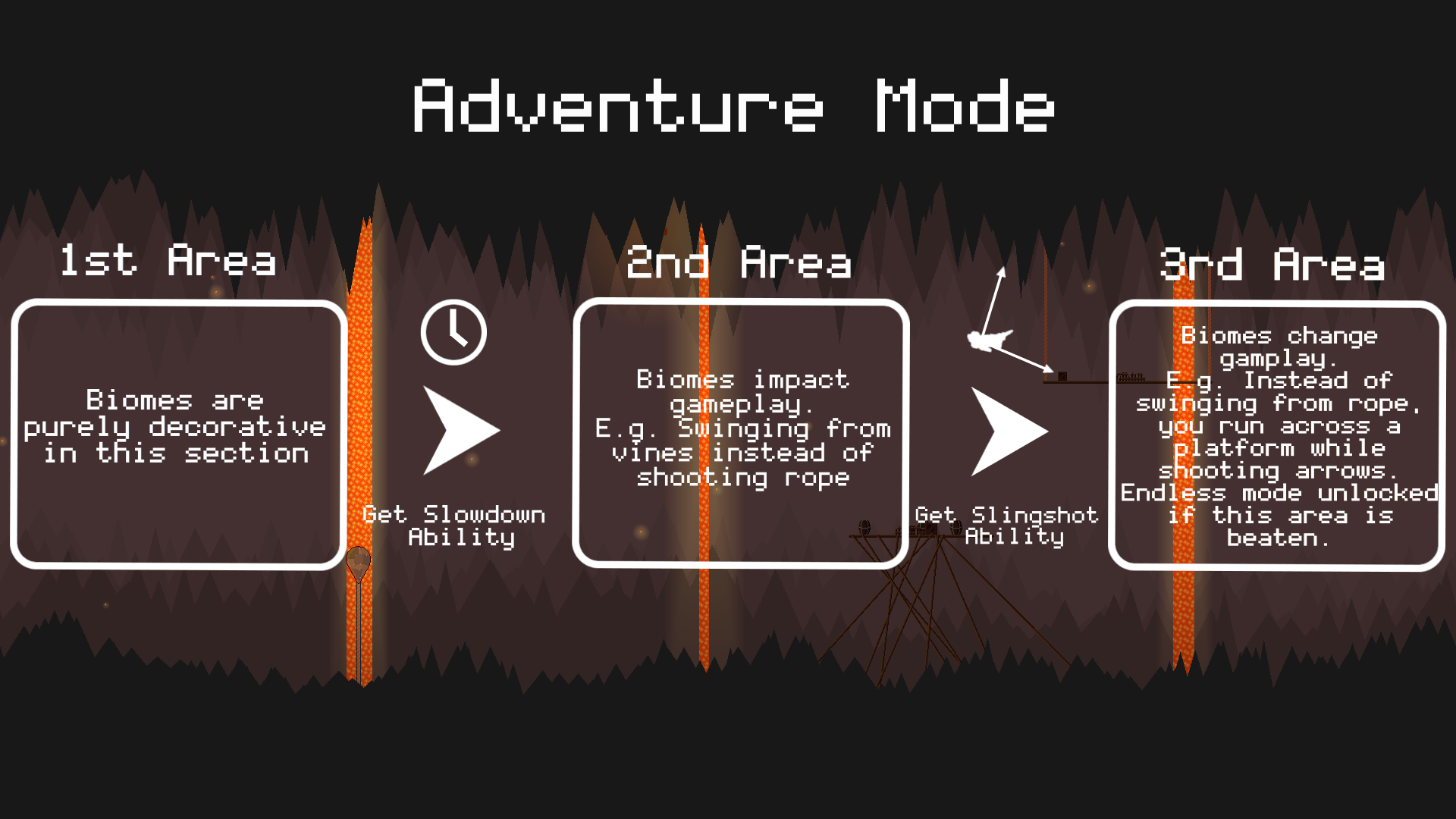 Adventure mode will be split into three sections or areas, each being deeper in the cave. (The biomes currently in the game will be in the first area). After you go through every biome in the current area, you will reach the start of the next area and you can start from there if you die. After finishing the first area, you will receive the slowdown ability, which as you can guess slows down time. This drains your blue stamina. After beating the second area you get the ability to slingshot yourself by shooting to ropes to propel yourself.

Surprisingly, these two abilities are already in the game but I felt they weren't necessary. I may not put them back in permenantly but you can try them out yourself in the newest version of Liment uploaded today! I've added them under "EXPERIMENTAL GAMEPLAY" in the top right of the start screen.

This is the plan I have for the final game, what do you think? Have I over scoped or am I missing the point of my game entirely? Whatever your opinion may be I'd like feedback on it before I dive straight in so leave a comment below. Check out the newest version ("Liment v1.4") and I'll see you next week with another dev log and version.